Despite laws against driving under the influence of alcohol, drunk drivers kill or injure thousands of people every year. If you have been injured by a drunk driver, contact The Fang Law Firm as soon as possible. Our experienced Denver drunk driving accident lawyers are committed to holding drunk drivers accountable and recovering compensation for the people they hurt. 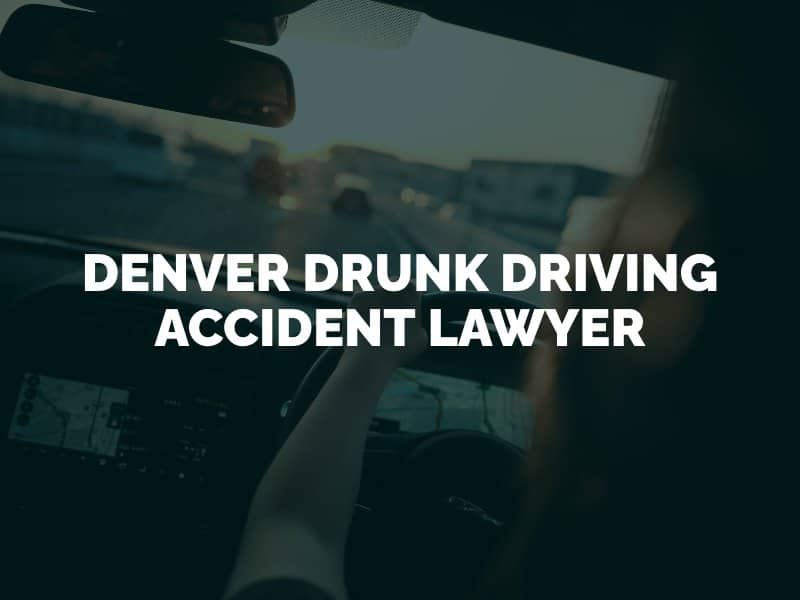 Why Choose Us for Your Attorneys?

Why You Need a Drunk Driving Accident Lawyer

Drunk driving is against the law and clearly dangerous. The drunk driver’s insurance company may offer to settle if it accepts that its policyholder was at fault for the accident. However, you should not accept a settlement without first consulting with an experienced Denver drunk driving accident attorney. Insurance adjusters have the insurance company’s best interests at heart. They will make a lowball offer that does not cover all your losses to make your claim go away as cheaply as possible.

The National Highway Traffic Safety Administration (NHTSA) reports that in 2016:

Like many other states, Colorado sets “per se” blood alcohol concentration (BAC) at .08%. This means that a driver with a BAC of .08% can be convicted of DUI without any other evidence of impairment. For drivers under the age of 21, the state enforces a zero-tolerance law in which a BAC of .02% to .05% could result in a conviction.

DUI penalties may include automatic driver’s license suspension, fines, and a long list of fees. As stated by the Colorado Department of Transportation (CO DOT), average costs associated with a first-time DUI can total $13,530.

To pursue a civil action against a drunk driver, you must show that:

Damages you may be entitled to claim include past and future medical expenses, lost wages, loss of earning potential, pain and suffering, and emotional distress. Our Denver drunk driving accident lawyers will assess the full extent of your injuries and pursue the maximum compensation available under the law.

Evidence in a Drunk Driving Case

You may be able to collect evidence while still at the scene of your accident. If possible, take photos of key elements such as tread marks on the road or empty alcohol bottles in the driver’s car. Write down the names and contact numbers of any eyewitnesses. Write down your police report number, as well. Gathering evidence can help you build a stronger claim against the drunk driver.

How the Driver’s Criminal DUI Charge Affects Your Claim

Something else that could be of use in proving your drunk driving accident claim is a criminal driving under the influence charge against the defendant. Official DUI charges show there is enough evidence of the other driver’s intoxication to lead the prosecution to believe they can secure a conviction.
If the criminal case against the defendant leads to a DUI conviction, this can serve as further evidence supporting your civil claim. Your lawyer can use the conviction as proof of the driver’s intoxication. If, however, the criminal DUI case does not lead to a conviction against the defendant, do not assume you don’t have grounds to hold the driver civilly responsible.

It is possible for a driver to be found not guilty of a DUI charge but still be held liable for the car accident. The civil and criminal courts are held to different evidentiary standards. The standard is higher in a criminal case, meaning even without a criminal conviction, you may still have enough evidence for a successful civil lawsuit.

What Damages Can Be Recovered After a DUI Accident?

If your civil lawsuit against the drunk driver succeeds in holding that driver legally responsible for your accident, injuries and losses, that driver’s auto insurance company will have to pay for your damages. Available compensation for a drunk driving accident includes:

Although no amount of money can make up for your family’s serious losses from a drunk driving accident, an award could help you move forward with greater peace of mind by allowing you to pay off your debts and afford future needs, including medical care. Find out how much your drunk driving accident case is worth during a free consultation at The Fang Law Firm.

Our Denver drunk driving accident attorneys are dedicated legal advocates for victims of drunk drivers. We will fight against the insurance company or responsible party to protect your rights and gain the compensation you deserve. If you have been injured by a drunk driver, contact The Fang Law Firm in Denver right away.