If you get injured while someone is carrying out a crime – such as assault, battery or robbery – the line between the civil and criminal justice systems can become blurred. In Colorado, an injured victim can seek justice through both systems if a harmful crime was committed. In this scenario, it is important to understand the difference between a tort and a crime. 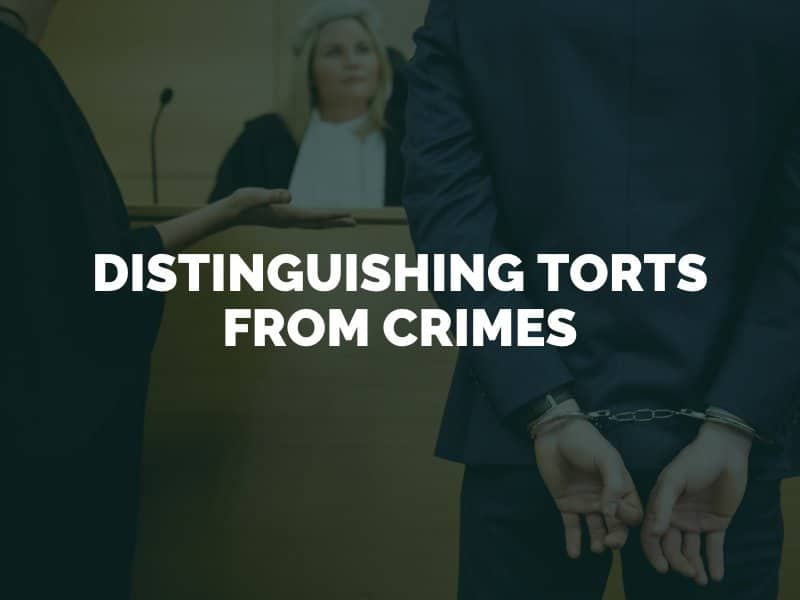 What Is a Tort?

The subject of torts vs. crimes can get confusing, as a tort can be a crime and vice versa. The easiest way to distinguish the two is to remember that “tort” is generally used in a civil case, while “crime” is for a criminal case. A tort refers to a wrongdoing against a victim for which he or she can be held civilly responsible. While a tort can be a crime, it does not have to be. There are many types of torts, including:

Carelessness, recklessness or a wanton disregard for the safety of others can all meet the definition of tort without the defendant having committed a crime. If a tort results in an injury, harm or property damage, the victim can file a personal injury claim in pursuit of financial compensation. A successful tort claim will require the defendant (or their insurance company) to pay for the victim’s related losses. The goal of a tort claim is to make the victim whole again.

What Is a Crime?

A crime means that someone has committed a wrongdoing against society – not just an individual person – by breaking an established law. A crime can be committed by violating a state or federal ordinance. Many different acts have been deemed illegal, including intentionally injuring someone (assault or battery), using a weapon to injure someone, kidnapping, and driving under the influence of drugs or alcohol.

If someone commits a crime in Colorado, law enforcement can arrest that person and subject him or her to criminal court procedures. Unlike a tort claim, the purpose of a criminal case is to punish the defendant for breaking the law, not to make the victim whole again. However, the victim of a crime could receive a monetary award known as restitution at the conclusion of a criminal case.

Key Differences Between Torts and Crimes

If you are injured in an incident that involves a broken state or federal law, differentiating between a tort and a crime can be confusing. Four key differences to remember are:

A personal injury attorney in Denver can help you understand the difference between tort and crime, as well as how these legal doctrines affect your specific injury case. For more information, request a free consultation with an attorney at The Fang Law Firm today.