Is It Illegal to Ride a Bike on a Sidewalk in Colorado?

Whether or not bicyclists are allowed to use sidewalks has been a longstanding debate in many cities. To pedestrians, a bike on a sidewalk presents a hazard, as they may get knocked down by a careless cyclist. To bicyclists, riding on a sidewalk is a safer alternative to sharing the road with motor vehicles. Find out whether cyclists are allowed to ride their bikes on sidewalks in your city in Colorado. 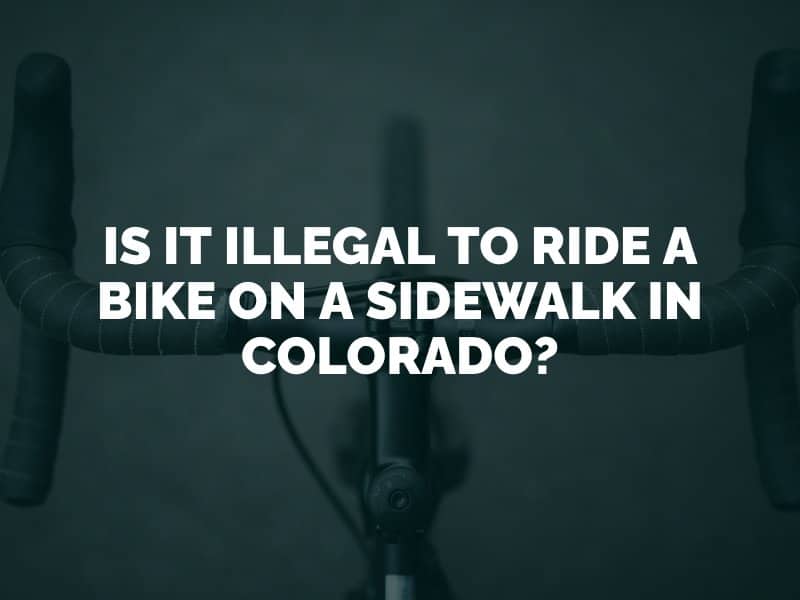 There is no statewide law in Colorado that bans bicyclists from riding on sidewalks. Under Colorado law, a person can ride a bicycle on a sidewalk as long as he or she yields the right-of-way to pedestrians. If a cyclist wishes to pass a pedestrian when riding on a sidewalk, the cyclist must give an audible signal, such as ringing a bell or using a verbal signal.

The law also stipulates that cyclists who use crosswalks must do so in a manner that is safe for pedestrians. Thus, bicyclists in Colorado may lawfully ride on sidewalks under state law, as long as they yield to pedestrians. However, the law also states that a person shall not ride a bicycle or electric scooter along a sidewalk if local ordinances prohibit it.

Denver and Other Municipalities: It Depends

Whether or not you can lawfully ride your bike on a sidewalk in your city – especially in downtown zones – depends on municipal law. For example, like most major cities in Colorado and throughout the U.S., Denver has banned the use of bicycles on sidewalks within city limits. Denver Municipal Code in Section 54-576 states that riding a bicycle or electrical assisted bicycle along a sidewalk used by the general public is illegal, except in the following circumstances:

If a bicyclist in Denver is permitted to ride on the sidewalk under these restrictions, he or she must yield the right-of-way to all pedestrians on the sidewalk. Before you bike on a sidewalk in a location outside of Denver, check that city’s municipal code. If there is a local ordinance prohibiting you from riding on the sidewalk, you must use available bicycle lanes or ride in the street.

Liability if Someone Is Injured on a Bike on a Sidewalk

If a bicyclist causes an accident and injuries while riding on a sidewalk in Colorado, liability (financial responsibility) will generally fall to the person who was behaving negligently or breaking a roadway rule. If under state or local law the cyclist should not have been riding on the sidewalk when he or she struck a pedestrian, causing a pedestrian accident, for example, the cyclist will most likely be liable for the pedestrian’s injuries.

Only in limited circumstances would a pedestrian be found liable for a collision involving a bicycle that is riding on a sidewalk, since cyclists must always yield the right-of-way to pedestrians. If a pedestrian intentionally jumped out in front of a biker, for example, the pedestrian could be liable. Otherwise, the biker will most likely be responsible for failing to follow a local ordinance, yield the right-of-way to pedestrians, or bike with reasonable care and prudence.

If you get injured in any type of accident involving a bicycle, including a cyclist who was riding a bike on a sidewalk, please contact a Denver bicycle accident lawyer at The Fang Law Firm to arrange a free initial consultation. You may be entitled to financial compensation from the cyclist’s insurance provider. We can help you seek justice and a fair monetary recovery.