Are Pit Bulls Allowed in Colorado?

Many cities and states have laws in place restricting dog ownership in terms of breed and type. These controversial laws stem from statistics that show some dog breeds tend to be more dangerous than others. For example, for three years in Denver, pit bulls were in the top six biting dog breeds across all levels of dog bite events. Pit bulls are more frequently involved in severe and deadly dog bite incidents compared to other dogs, leading to many laws specifically against this breed. Colorado is one of many states with laws banning pit bulls. 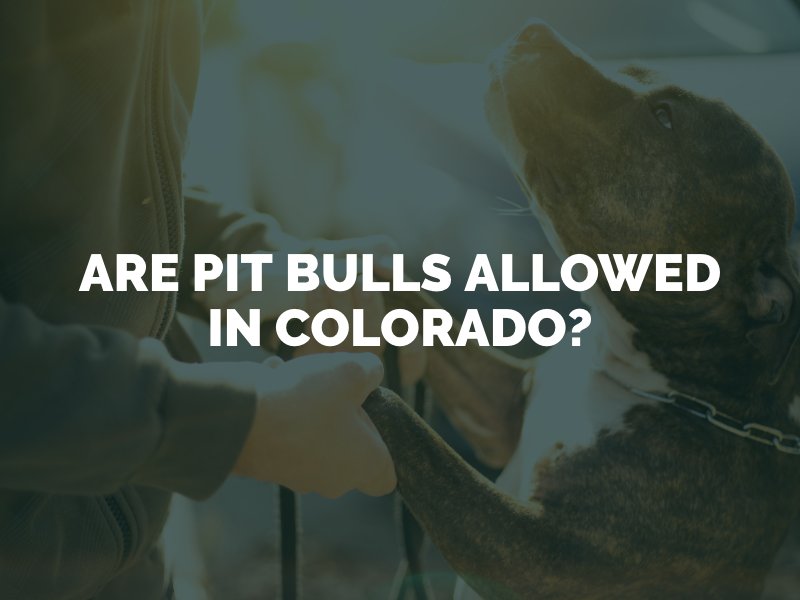 The City of Denver has had an ownership ban on pit bulls for over 30 years. The passing of Ordinance 8-67 in Denver in 1989 prohibited the ownership or keeping of any pit bull within city limits. This law, with some exceptions, states that it is unlawful to own or keep a pit bull in Denver. Exceptions include an owner with a dog license from the Denver Animal Shelter on or before August 7, 1989, as well as any humane society with a registered and licensed animal shelter that must temporarily hold a pit bull.

Anyone who lawfully owns a pit bull in Denver must at all times keep the dog confined inside or in a secure enclosure. The pit bull must be spayed or neutered and have its rabies vaccination. The owner must also post pit bull signs at all entrances to the property. The penalties for illegally owning or harboring a pit bull in Denver include the immediate impoundment of the dog. Attempts to lift the ban have so far failed, including Mayor Michael B. Hancock vetoing the most recent measure to appeal the law in 2020. Mayor Hancock stated that he could not in good conscience lift the ban due to his belief that it would pose an increased risk to public safety.

Other Cities in Colorado That Ban Pit Bulls

Denver is not the only Colorado city that prohibits the ownership of pit bulls. Several other cities also have breed restrictions in place specifically against pit bulls. It is important to learn the law in your city before moving or becoming a pet owner. Otherwise, you could face penalties such as fines and the impoundment of your pet. The following cities also ban people from owning or keeping pit bulls.

A few other cities in Colorado have bans on dog breeds besides pit bulls. Louisville and Broomfield, for example, ban all wolf-dog hybrid breeds. The City of Lone Tree bans all fighting dog breeds, including pit bulls, canary dogs and American bulldogs. If found with a banned dog in one of these cities, authorities may impound the dog and put it in a shelter. The owner will then have the choice of surrendering the pet or moving to a location that does not have the same breed restriction.

What to Do If a Banned Breed Bites You

If you have injuries from a dog attack in Colorado, you may have the right to file a lawsuit against the pet owner. Colorado uses a strict liability dog bite law to hold pet owners liable for the damages a dog bite causes, regardless of any prior knowledge of the dog’s propensity for violence. In general, you will not have to prove that the owner possessed a banned dog breed in your city, such as a pit bull in Denver, to qualify for financial compensation. The pet owner could owe you compensation for your damages regardless, as long as you were lawfully on the person’s property and did not instigate the attack. Discuss your right to bring a claim against a pet owner in Colorado with a dog bite attorney today.