Do You Need to Take a Drug Test to Get Workers’ Comp in Colorado?

Employers in Colorado have the right to require employees to take drug tests for many reasons – or no reason at all. Employers can implement drug testing during the job application process, at random and after workplace accidents. An employer also has the right to require drug testing when a worker files for workers’ compensation. The results of this test could interfere with the worker’s ability to recover financial benefits. There are limits to the right to drug test, however, and procedures that an employer must follow. 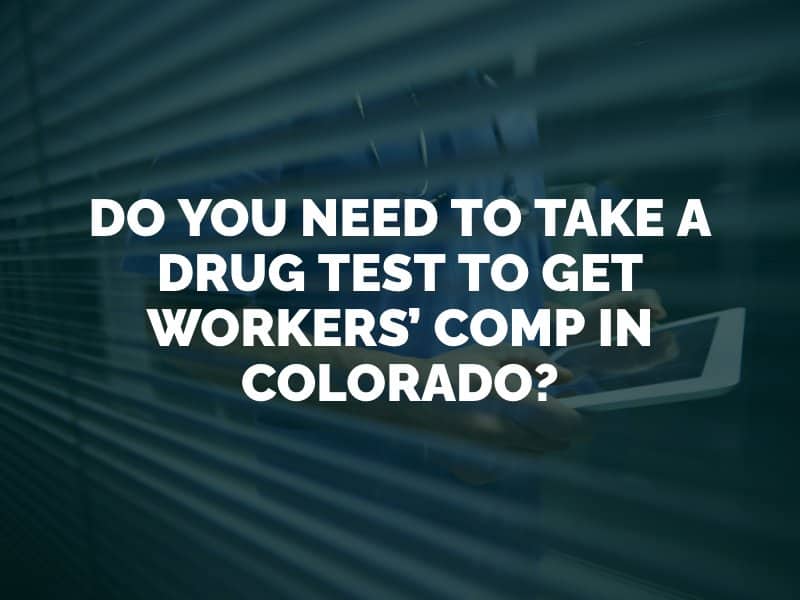 When Do Employees Get Drug Tested in Colorado?

Colorado law gives employers free rein over drug and alcohol testing in the workplace. Colorado is an “open” state, meaning there are no limitations or requirements for employers when testing for drug use in the workplace. Before an employer submits a workers’ compensation claim on behalf of an injured worker, the company has the right to order the worker to take a drug test to find out if drug use played a role in the occupational accident or injury. The employer must have a written policy for worker drug testing already in place in regard to workers’ comp and unemployment benefits, however.

Can You Refuse to Take a Drug Test?

If you believe that requiring a drug test before filing a workers’ compensation claim goes against your rights as an employee in Colorado, you can refuse. If you know that your employer did not previously have a written policy in place for drug testing, for example, you can use this to refuse to take the test. If there was a written policy in place, however, you cannot refuse without potential repercussions, such as getting fired. You may be subject to penalties for violating one of your employer’s policies without retribution. You also cannot sue an employer for having a clear, written policy outlining its right to drug test workers’ comp candidates.

What Happens if You Fail a Drug Test for Workers’ Comp?

If you take a mandatory drug test when filing for workers’ compensation benefits in Colorado and it shows intoxicants in your system, this can interfere with your ability to obtain workers’ compensation. Under Colorado law, your workers’ comp benefits can be reduced by as much as 50 percent if you were intoxicated by drugs or alcohol at the time of your accident. This rule can affect both your lost wage and medical payment benefits. However, you may be able to use an attorney to help you argue against this outcome.

An attorney can help you prove that you weren’t under the influence of the drug that appeared on your drug test at the time of your accident, for example. If marijuana was found in your system, for instance, this doesn’t mean that you were high when you were injured. The psychoactive component of marijuana, THC, can remain in your system and appear on a test for up to 30 days. Your lawyer may also be able to show that your work injury would have taken place regardless of the drugs in your system. An attorney can help you navigate a positive drug test result during a workers’ comp claim to minimize its impact on your financial benefits.

Can You Appeal a Claim Denial?

It is not uncommon for a workers’ compensation claim in Colorado to be denied on the first try. Insurance companies are often looking for ways to protect their profits, including wrongfully denying valid claims. If your case involves a positive drug test result, it is even more likely that the Division of Workers’ Compensation will reject benefits. You have the right to appeal this decision.

Appealing a workers’ comp decision may lead to an internal review and a reversal of the rejection. It may also result in a hearing before an administrative law judge. During this hearing, you or your lawyer will need to explain why you are eligible for workers’ compensation benefits despite a positive drug test or drug test refusal. You may need a workers’ compensation lawyer to help you build and present your argument during an appeal.