Electronic cigarettes and vape pens are immensely popular among smokers, including teenage and youth populations. Millions of people around the world currently use vape pens and e-cigarettes. One known risk of these devices is the possibility of fires and explosions from dangerous and defective batteries. 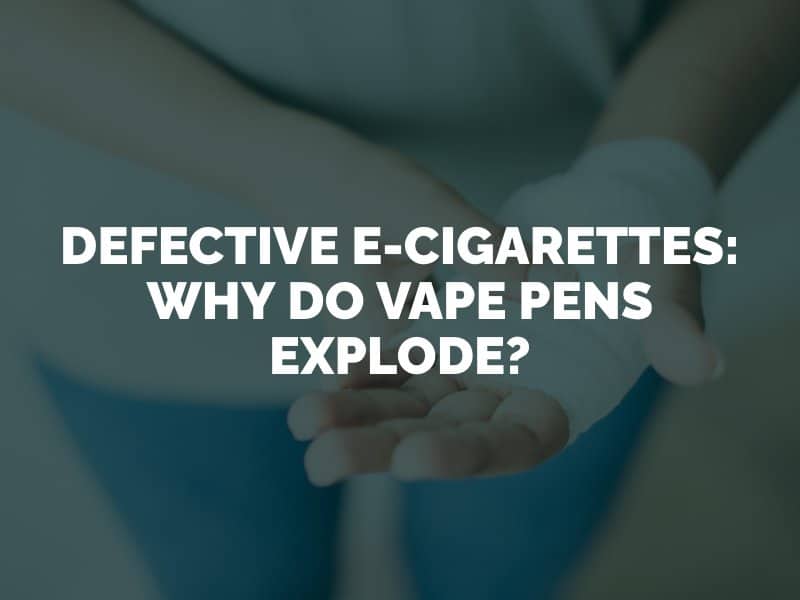 What Causes a Vape Pen to Explode?

Exploding vape pens and e-cigarettes is a significant issue that has resulted in many severe injuries and even deaths. According to the U.S. Fire Administration, from 2009 to 2016, 195 incidents of exploding electronic cigarettes took place, resulting in 133 injuries. It wasn’t until after the conclusion of the federal study that a young man in Florida lost his life due to an exploding vape pen in 2018, followed by a second death in Texas in 2019.

The cause of vape pen explosions is not the vape pen itself but the lithium-ion battery that the vape pen uses. An examination of defective e-cigarettes found that the overheating and combustion of these products was caused by the lithium-ion battery. These batteries contain combustible materials. If there is any problem with the battery – even a minor product defect – it can combine the highly flammable solvents within the battery and create heat, which can, in turn, create pressure that leads to a fire or explosion. These explosions can also take place with non-defective batteries if they get damaged.

The U.S. Fire Administration states that e-cigarettes are the only consumer product on the market that places a battery that is a known explosion hazard in close proximity to the human body. Vape pen fires and explosions can take place with any brand or type of e-cigarette if the device uses a lithium-ion battery. However, reports have mentioned specific brands and types of vape pens and batteries that have been involved in these events, including:

Any brand or type of vape pen with a lithium-ion battery could theoretically explode in use. If there is a defect with the battery or if the device is used incorrectly, such as using the wrong charger or getting the battery wet, it could lead to a fire and explosion. The best way to stay safe is not to use any type of e-cigarette or vape pen device – especially one that relies on a lithium-ion battery to operate.

The majority of fires and explosions involving defective e-cigarettes take place while the device is in the user’s pocket or in use. This can lead to injuries of the legs, thighs, face, mouth, skull and brain. Overheating, smoke, flames and explosions can result in many serious injuries for victims, including:

Many of these injuries are permanent, resulting in long-term issues for the victim such as required medical care, hospitalization, surgeries, medications and medical devices. These injuries can also cause emotional distress and psychological damage from the trauma of the event, as well as from permanently disfiguring or debilitating injuries.

If you or a loved one has been injured in a vape pen fire or explosion, contact a product liability attorney in Denver right away to discuss your legal options. You may have grounds to file a product liability lawsuit against the manufacturer of the lithium-ion battery and/or e-cigarette. A lawsuit can hold the company accountable for a defective product as well as result in financial compensation for your injuries and losses so that you can move forward.