Seat belts save lives, regardless of what the laws in your state say about wearing them. Numerous studies from nationally recognized safety organizations have proven the value of seat belts during auto accidents, including the National Highway Traffic Safety Administration. For example, almost half the people killed in auto accidents in 2017 (47%) were not wearing seat belts. Seat belts could have saved an additional 2,549 lives in 2017 had everyone buckled up. In Colorado, wearing your seat belt could also save you from legal trouble, as the state has a few seat belt laws in place. 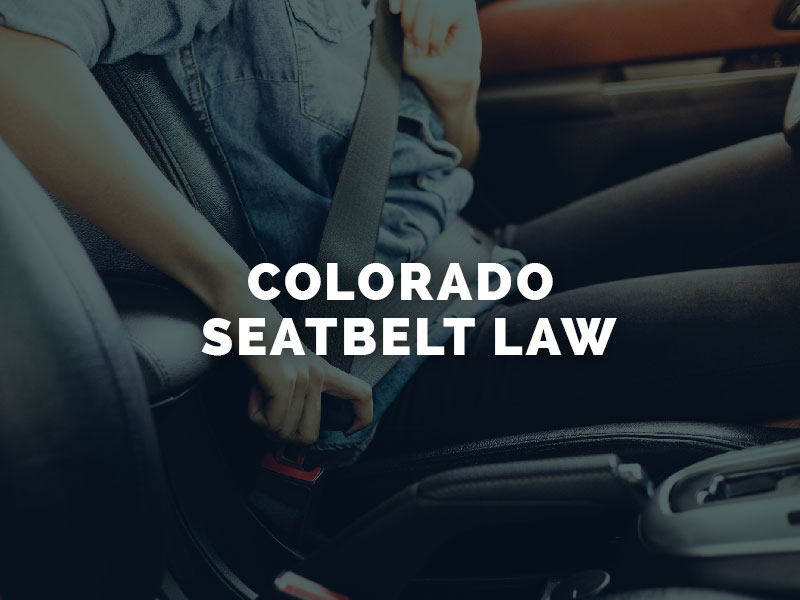 Are Seat Belts Required in Colorado?

Seat belt use is something the Colorado government takes seriously. The Colorado Department of Transportation (CDOT) uses strategies such as annual Click It or Ticket campaigns to encourage seat belt use statewide. According to CDOT statistics, 220 unbuckled vehicle occupants lost their lives in Colorado auto accidents in 2018. At least 70 people would likely have survived had they been wearing seat belts. About 86% of Colorado residents use their seat belts – 4% less than the national average of 90%. Nationwide, Colorado is in the bottom one-third of states in terms of seat belt use.

Although Colorado does not have a universal seat belt law requiring all vehicle occupants to buckle up, it does require all drivers and front-seat passengers to wear seat belts. Anyone in the front passenger seat of a vehicle, as well as all drivers, must buckle up in Colorado. Colorado lawmakers chose this type of seat belt law based on evidence that the risk of fatal injury is greater for front-seat passengers than those in the back seat. Statistically, however, seat belts reduce the risk of injury from every seat in a vehicle.

Colorado also requires seat belts for all minor drivers and passengers, regardless of where they sit in the vehicle. Anyone under the age of 18 must wear a seat belt at all times in a motor vehicle, or risk the parent or guardian getting a citation. Young children have additional child restraint requirements under state law that mandate the use of child safety seats for children under eight years old. Children must use rear-facing seats, forward-facing car seats or booster seats depending on their ages, heights and weights.

Penalties for Not Wearing a Seat Belt in Colorado

Colorado has a secondary seat belt law, meaning police officers cannot use the failure to wear a seat belt as the sole reason for pulling a driver over. The officer must have a different primary reason for the stop, such as speeding or rolling through a stop sign. Only then may an officer issue a ticket for breaching the state’s seat belt laws. The officer may ticket the driver and any additional passengers who should be wearing seat belts but are breaking the law. Violating Colorado’s seat belt law is a Class B traffic infraction, punishable with a $65 fine per offense.

If you fail to wear a seat belt, you could also face civil repercussions. If you get into a car accident and suffer serious personal injuries, lack of seat-belt wearing according to the state’s laws could give the at-fault driver a reason to refute liability for your injuries. The defendant could owe you less compensation after proving your injuries reasonably would have been less severe had you been following Colorado’s seat belt law, for example. Always wear your seat belt in Colorado to help save yourself from physical, legal and financial consequences.