Being a good Samaritan means to help others without any expectation of a reward. It is an unselfish act, usually toward strangers, that could make a big difference during a crisis such as an auto accident. Unfortunately, many people have chosen to stop being good Samaritans for fear of being liable for a victim’s injuries or damages. To counteract this concern, many states have passed Good Samaritan Laws to encourage people to lend helping hands in emergencies. 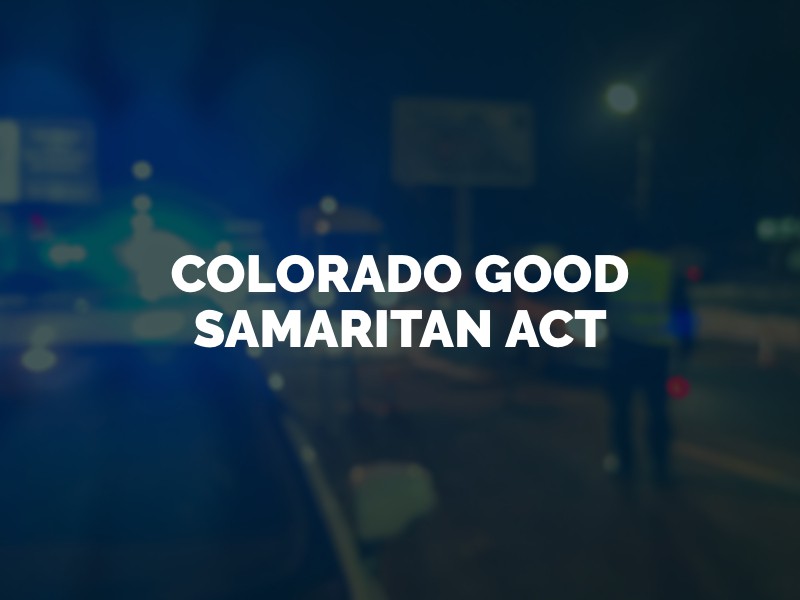 What is Colorado’s Good Samaritan Law?

The Colorado Good Samaritan Act is in section 13-21-108 of the Colorado Revised Statutes. It states that anyone who renders good faith assistance in an emergency is exempt from liability. The rule includes licensed health care practitioners, emergency responders and anyone else who renders assistance without compensation at the scene of an emergency. In other words, a good Samaritan who helps in an emergency will not be liable for any civil damages, even if that person makes a mistake that harms the victim.

An exception to the Good Samaritan Act is if the person rendering aid is guilty of willful or wanton misconduct or gross negligence. In these situations, the person could be financially responsible for any damages the victim sustains, including physical injuries, hospital bills and property damages. If the individual rendered aid in good faith, however, he or she will not be liable, even if the person makes a mistake that worsens an injury or causes other damages. If a person rendering good-faith aid in an emergency moves a spinal cord injury victim the wrong way and causes paralysis, for example, that person would not be liable for damages.

Another exception is if the person rendering aid is getting paid to cover the patient. A paid emergency service worker, for example, could be liable for making a mistake that harms the patient while responding to an emergency. The Good Samaritan Act only applies to those on the scene who offer assistance without compensation. Volunteer members of rescue units also benefit from the protection of the Good Samaritan Act, as long as the volunteer is unpaid. The act also protects anyone volunteering in ski patrol or rescue units.

Colorado has a separate Good Samaritan Law specifically for people who call 911 in emergencies. Colorado Revised Statute 18-1-711 protects citizens from criminal charges if they call the police during emergencies, even if the situation involves broken laws such as the possession or consumption of illicit drugs. Any person involved in a drug or alcohol overdose emergency that calls 911 for help is immune from arrest and prosecution for substance-related crimes. This rule applies to both the good Samaritan that dials 911 and the person suffering the overdose.

How Does the Good Samaritan Act Affect Personal Injury Claims?

Although the Good Samaritan Act in Colorado protects certain parties from liability, it does not mean the victim will have no grounds to file a claim against others. A victim of a personal injury accident could retain the right to file a lawsuit against one or more parties for negligence that contributed to the original accident. An accident survivor may be able to file a claim against someone for the underlying cause of the injury, even if he or she cannot hold a good Samaritan responsible for exacerbating or causing injuries.

In a car accident case, for example, an injured victim may not have a case against a good Samaritan that made a mistake and exacerbated his or her injuries but could potentially file a claim against the driver that caused the car crash. Working with a Denver personal injury attorney could help an accident victim understand who may be responsible for his or her damages – including a good Samaritan that acted willfully or wantonly while rendering aid. One or more parties could be liable for a victim’s damages in Colorado.